In the leading article, Pixels, pixel size, megapixels and sensors in a smartphone camera were explained. Below are other related terminologies.

This is used to describe how big or small an image sensor is. The size determines how much light can enter the camera, and this in turn affects the image quality.
In the first part of this article, the sensor was described as the device that captures the light that enters the camera. The size of a smartphone camera sensor is expressed in inches (“) or fractions of an inch. The closer the size is to an inch the bigger the sensor.

To avoid confusion, this is the same as pixels and it makes up the camera’s megapixels count. It is sometimes referred to as microns and it is measured in micrometers (µm). Photosites work with the mission of gathering light, so, the larger the photosites the more light they can gather. This quality is essentially used in taking pictures in low-light conditions.

ISO is the popular term used to describe this on the spec list. It means the rating of the image sensitivity for camera sensors. The darker the light, the higher the ISO is the rule governing this rating number.
Although, increasing the ISO isn’t advisable as the image produced looks grainy. 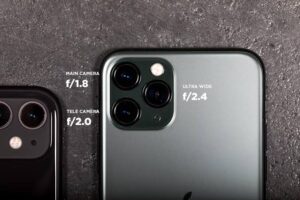 This is the adjustable opening between the camera lens and the sensor. It controls the amount of light that the sensor captures. It is measured in f-stops or f-numbers. F-number is the ratio of the focal length of the camera to the physical diameter of the aperture (e.g f/16, f/2). The smaller the diameter of the aperture( that is, the denominator of the f-number) the less light passes through while the bigger the diameter of the aperture, the more light passes through. In the human eye, an aperture is likened to the pupil.
Aperture also controls the overall sharpness of the image and helps achieve a shallow depth of field. 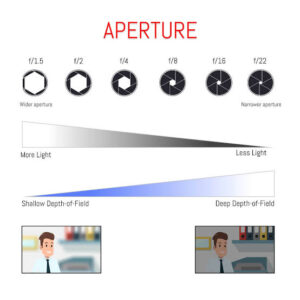 Stability is an important criteria to take the perfect memorable picture or video. You do not want your photos to come out blurry. Tripods provide stability to the phone but they cannot be carried around. This is why smartphones these days are embedded with technology that tries to reduce the effect of instability on the image to be produced. The technology is in form of Optical image stabilization (OIS), Electronic image stabilization (EIS), and Hybrid image stabilization (HIS)

This technology works using a gyroscope sensor (this is used to achieve a balanced image) and electromagnets. The gyroscope spots the smartphone’s instability and adjusts while the electromagnets move the lenses and sensor to accommodate the change. In low light conditions, this type of image stabilization is useful because while adjusting the lenses, it is gathering light. It is also useful in recording videos.

Various types of digital cameras to know for good photography