Did Human Lives Become Easier After Technology Came Into It?

For some of us born in this computer age, it is incredibly difficult to imagine being born without technology as our saving grace. Imagine going to an unfamiliar place without Google Maps or waiting for a reply to your letter for days after taking days to deliver. People born in those days didn’t see it as a big deal but Google Maps and Online messaging platforms have opened our eyes to how stressful it must have been then.
Everything one had to do or buy or use was gotten by stepping out of one’s house, unlike now that online services have made life easier. Just a few buttons clicks on your smartphone with your readily available pay card and whatever you want is ready.
From all these scenarios painted above, we can conclude technology has made human lives easier and the more advanced technology becomes, the more comfortable people become. Although this comfort technology brought has also brought about more cons in human interaction.

How life used to be vs how it is now 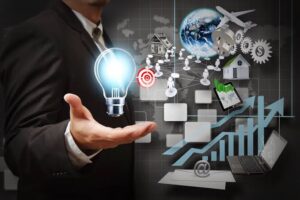 Many years ago before people recognized technology, the technology existed but it wasn’t centered and it was not as affordable and accessible as it is now. The people who had access to it only used it to get through their day, nothing wowing or spectacular. People were more focused on living through their day, going about their businesses without hesitation. Let’s take a sneak peek at how life used to be.

Letter writing:  Letters have been in existence since forever and it is still in existence. The difference between letter writing then and now is the concept of writing it and the channel it passes through. Letters then were handwritten and had to pass through post offices for both the sender and the receiver. Now, letters are sent via email and social media platforms.

Developing films for photography: unlike now that we can capture memorable moments at the click of a button, then they had to wait for about a week before the film is developed. Imagine waiting for that much to get a picture of how memorable your day went, frustrating, right?

Cash and Cheques: when it comes to money, this was the order of the day. There was nothing like CashApp or Paystack. When you want to send money to people in a far distance, you put it in an envelope and post it like a letter.

Documents printing: Now, we have the luxury of saving our documents using cloud services. Before, people printed everything they wanted to keep as there were no online services then.

Library: Search engines and Book apps have made so many people too lazy to go to a physical library. Back then, to read books by one’s favourite authors, one had to go to the library.

Cinemas: Even though cinemas are still in existence and still serving their purpose, people have alternatives now unlike before. To watch your favourite actor on screen, the cinema is your go-to place. There is no luxury of laying on your bed and streaming movies on your smartphone or watching them on your TV.

Health and Nutrition: Health-wise, staying fit wasn’t a priority on their list as everything they had to do require them to constantly be on the move. This indirectly equals burning calories in our today’s world. That means they were still keeping fit even though they weren’t paying attention to it. These days, as technology is growing, there are fewer and fewer reasons to leave a spot, it is easy to keep ingesting calories without burning them which is unfit.
When it comes to nutrition, we have so many “do not eat” or “reduce the intake” now and one of the reasons is stated above. Then, they barely have processed foods and even though the focus wasn’t exactly on controlling what people ingest, one can conclude there was a healthier lifestyle than now.

Calls: The cost to make calls bothered people a lot, especially long-distance ones. Now, all you need is a data subscription and you are good to go.

Jobs: Jobs these days are into categories. On-site, remote, and hybrid. Back then, jobs were onsite. You had to wake up early to go to work and return home.

The points made above and so many unmentioned ones are aspects technology has touched regarding human lives and as technology keeps advancing, it keeps touching more and more aspects.

List of social media jobs that can get you rich quickly

4 things you need to know about Lean Burn Engine Technology.