Android, owned by Google constitutes about 75% of users globally since its inaugural release in 2008. Android evolution started from Android 1.0 to Android 12 and news has it that Android 13 will be released this year.

The Prominent Changes in Android Evolution

Android 1.0 came with Google apps like Gmail, Calendar, Maps, YouTube and a web browser known as Google Chrome today.
Android 1.5 (Cupcake)
It was released in the earlier part of 2009. The first onscreen keyboard was introduced as regards the widely used physical keyboard. The framework of third-party app widgets which brought about the first ever option for the recording of videos was introduced.
Android 1.6 (Donut)
It was released in the later part of 2009 and it came with the ability to operate on different phone screen sizes. It also came with the support of Code-Division Multiple Access(CDMA), which is the channel access method used by various radio communication technologies. Phones using this technology don’t need a SIM Card. Verizon is an example of a CDMA network.
Android 2.0 (Eclair)
Six weeks after the release of Android 1.6, 2.0 was released and a few months after, Android 2.1 came about. It came with new updates which include the live wallpapers, pinch-to-zoom, speech-to-text function and voice-guided turn-by-turn navigation and real-time traffic informant. This made it easy for users when in need of a route to pass to avoid traffic or when they are unsure of which way to pass.
Android 2.2 (Froyo)
It came on about four months after Android 2.1. It came with Voice actions and the dock at the bottom of the home screen.
Android 2.3 (Gingerbread)
It came live in 2010 and it was mostly about colours and design.
Android 3.0-3.2 (Honeycomb)
These were released in 2011 and were tablet-only releases and they concentrated more on design. Card-like UI of the recent apps list was introduced and the overflow-menu button.
Android 4.0 (Ice cream sandwich)
Also in 2011, this version was released. It worked on the swiping feature and instead of deleting, one could easily swipe them away.
Android 4.1-4.3 (Jelly bean)
These were the android updates for 2012 and 2013. The voice search system, notifications, and display of search results were worked upon. The versions allow multiple users and place widgets on the lockscreen.
Android 4.4 (KitKat)
It was released in the later part of 2013, this version came with light backgrounds and neutral highlights. It also came with OK, Google support.
Android 5.0 and 5.1 (Lollipop)
They were released in the later part of 2014. This release came with a card-like concept which has now come to become an integral part of Android’s UI. From notifications to the Recent apps list. It was also an upgrade on the Android 4.4 releases.
Android 6.0 (Marshmallow)
This version was released in 2015. Support for fingerprint readers, an upgrade on app permission and USB Type-C came about. 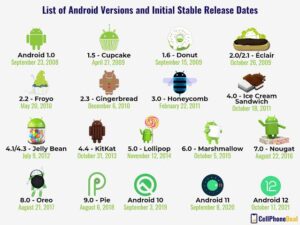 Android 7.0 and 7.1 (Nougat)
They were released in 2016. It came with a new system for organizing notifications, a way of splitting the screen to enable users to do two things at once, the Data saver feature and the launch of Google Assistant. The same year, Google announced the manufacturing of its phone, the Pixel.
Android 8.0 and 8.1(Oreo)
They were released in 2017 and they came with a notification snoozing option and control over how apps can notify you, a picture-in-picture mode that enables you shrink a video into a small player which you can move around your home screen and position it over other apps.
Android 9 (Pie)
This update came with a more improved intelligence for smartphones as regards power, screen brightness, productivity features, privacy and security.
Android 10
It was released in 2019 and came with an improved gesture mode. It relies heavily on swipes for its system navigation. This version was an improvement on the previous releases.
Android 11
It was released in 2020 and it came with an improvement in privacy and control over connected devices especially when they tend toward smart products associated with your account. Bubbles system came with this update to aid accessibility of conversations from applications that support this feature. The scheduling of dark themes all over the system also came with this release.
Android 12
It was released in 2021. This update revolves around the improvement of the interface giving it an entirely different look.

As an Android version becomes outdated, the phone will no longer receive any OS upgrade or updates and Security patches from the manufacturer of the device.

A Sneak Peek on the Trends of Internet of Things.